The People Before by Charlotte Northedge, Harper Collins Publishers (2022) 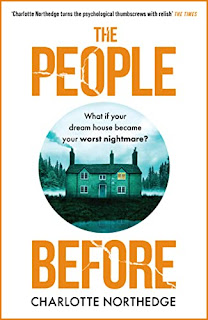 What if your dream house became your worst nightmare?

Jess and her husband need a new start. So when the chance to buy a rambling old house in the Suffolk countryside comes up, they leap at it.

But not everyone in Suffolk is welcoming. The locals know a secret about the Maple House, and soon, Jess realises they’ve made a huge mistake.

Something bad happened in that house. Something nobody wants to talk about.

Something to do with the people before…

Tense and creepy with a few characters who are as odd as the house Pete and Jess have just moved into. Secrets, lies and misunderstandings do not make for good marital relations nor does the stress of moving into a somewhat isolated and dilapidated old house which feels like it could be haunted. And indeed I was expecting a haunting especially as the children seemed to be so sensitive to the atmosphere and people around them.As the history of the house slowly becomes revealed the tension ratchets up. There is a general sense of threat and menace surrounding the children that Jess and Pete seemed oblivious to and when the story is told from Eve's point of view it becomes clear that the couple is dealing with something extremely nefarious. I had no confidence that they would be able to cope or come out on the winning side.There are a few twists and turns but no crazy reveals or unnecessary twists at the end. It concludes in a satisfying way with drama and suspense.

The People Before is out now Amazon