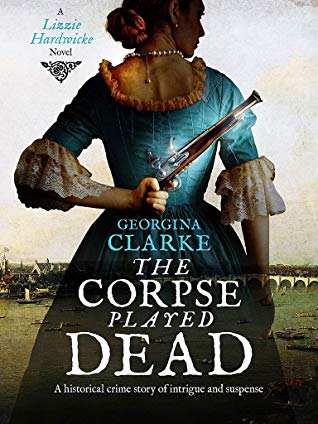 ‘All the world’s a stage, and all the men and women merely players…’

When an undercover assignment for the Bow Street magistrate sees prostitute Lizzie Hardwicke trade Ma Farley’s Bawdy House in Soho for life as a seamstress the theatre on Drury Lane, it becomes clear quite quickly - what goes on in the wings is much more intriguing than the theatrics being played out on stage…
Soon Lizzie is once again thrown together with the handsome Inspector Will Davenport when a high profile investor is brutally hanged at centre stage and Lizzie discovers the body. With the suspect list rivalling any casting call, Lizzie will have to use every trick she’s hidden up her sleeves to unravel the tangled threads and bring the culprit into the spotlight.

The Corpse Played Dead is the second book in the series and equally entertaining as the first. The series is now copper-fastened in my auto buy list.
The characters are hugely appealing. The honourable Inspector Davenport, enlists the help of feisty and beautiful Lizzie Hardwicke. I couldn't help but suspect that he recruited her simply to keep her out of the brothel. I'm hoping his next case won't be too far away.
The time and setting is thoroughly researched so everything about the place and characters ring true. I felt like I could almost walk into that theatre and touch it.
The murder mystery itself was very intriguing. I didn't have much sympathy for the first victim but when the bodies started to pile up it was a different matter. It got very suspenseful and exciting towards the end and I was gobsmacked at the identity of the killer.
I love the relationship between Lizzie and the Inspector. They have the beginnings of a close friendship and partnership of sorts and I have a feeling we will be teased with the 'will they or won't they' for a while to come. I can't wait.


You can buy The Corpse Played Dead now at Amazon
Have you read the first book? Death and the Harlot is £1.99 right now for Kindle.
Posted by Just Book Talk at 11:11:00