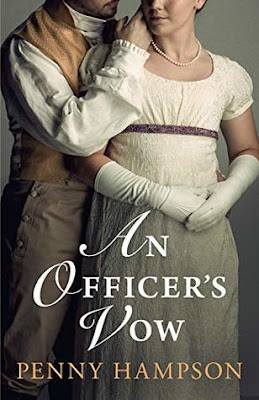 The future looks bleak to Major Nate Crawford. Depressed after being sent home from the Peninsular Campaign as unfit for service, he contemplates ending it all. Then an unexpected opportunity for adventure beckons in the shape of a delightfully intriguing runaway heiress. He will prove his worth as an officer and a gentleman by offering his help. He has a plan…Lottie Benham is desperate. Her life is in danger and she needs a place of safety until her next birthday. The unexpected proposal from this attractive, but intimidating officer could be the answer to her prayers. Not normally a risk-taker, she decides to gamble all by placing her trust in this charismatic gentleman, who she suspects might be more in need of help than she.But the best laid plans… Caught up in conflict, danger, and deception, will Lottie and Nate survive to find the perfect solution to their problems? An Officer’s Vow is the second in Penny Hampson’s Regency-set Gentlemen series, following the exploits and misadventures of a loosely linked group of friends. Penny Hampson Writes History, Mystery, and… a touch of Romance.

Adventure and intrigue in Regency England. The action starts in the opening scenes where Nate and Lottie collide on the road and it's a fast paced tale from there on out.
Lottie and Nate made a sweet couple but I found them infuriating in the way they constantly misinterpreted each other's feelings. It seemed to take a long time for them to straighten things out in the end.
Lottie was a great character. She was strong and brave. I was glad that she wasn't a complete damsel in distress.
This is book 2 in the series and can be read as a standalone. The Duke of Wheatley and Francis intrigued me. I look forward to reading more about them and their adventures.