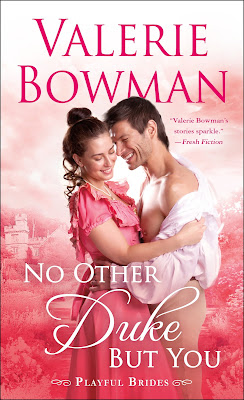 Synopsis:
A lady with a love potion. A Duke who takes it by mistake. Romance and mischief ensues when plans go awry in No Other Duke But You by Valerie Bowman.
SINGLE LADY SEEKS DUKE
Lady Delilah Montebank has her marital sights set on the Duke of Branville. There’s just one problem: he barely knows she exists. But no matter, she’s got a plan to win him over with her charm, her wit—and perhaps the love potion she has in her possession wouldn’t hurt her cause...
Lord Thomas Hobbs, Duke of Huntley, thinks his best friend Delilah’s quest to become a duchess is ridiculous. He’s always said he’d rather give up all the brandy in London than commit to one person for life. Besides, he knows that Delilah’s love potion can’t possibly win over Branville…since she accidentally gave it to him instead. But perhaps this is the excuse he needs to show her he’s always loved her...
Delilah can’t believe she gave the potion to the wrong duke. Then again, Delilah could do a lot worse than win the hand of her handsome best friend. Could it be that the right duke has been before her eyes all along? 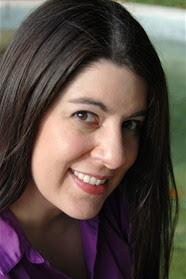 Valerie Bowman grew up in Illinois with six sisters (she’s number seven) and a huge supply of historical romance novels. After a cold and snowy stint earning a degree in English with a minor in history at Smith College, she moved to Florida the first chance she got. Valerie now lives in Jacksonville with her family including her mini-schnauzers, Huckleberry and Violet. When she’s not writing, she keeps busy reading, travelling, or vacillating between watching crazy reality TV and PBS.

I love Valerie Bowman's books and I've enjoyed this series a lot. This story is light and lively, with crazy mishaps and lots of fun. With the mention of a love potion in the synopsis I knew I was in for an unusual Regency read.
It may be a bit sillier than the other books in the series but I needed a quick fun read and this book fit the bill perfectly.

Q: How is NO OTHER DUKE BUT YOU, your upcoming novel, different than your previous novels, or can you say anything more about it?

A: NO OTHER DUKE BUT YOU is the final book in the Playful Brides series. It’s book #11, and while it can be read as a standalone, I know the long-time readers of the series have been waiting for this couple’s story. Delilah is my most asked about heroine.

Q: Where did you get your inspiration from for NO OTHER DUKE BUT YOU?

A: Most of the books in the Playful Brides series are inspired by famous plays. This one is inspired by A Midsummer Night’s Dream, which is one of my favorites. I’ve had the plot in mind for a long time.

Q: What makes Lady Delilah and Lord Thomas special? Can you say anything more about them?

A: Delilah is sassy, unconventional, and a bit of a mess compared to the other young ladies on the marriage mart. But she has a heart of gold and good intentions to be the best matchmaker in the land, until it’s time for her own match to be made, of course! Thomas is her best friend who has been madly (and secretly) in love with her for years. He appreciates her for who she is.

Q: Who would you cast for Delilah and Thomas in the movie version?

A: I love this question! I’ve set up a Pinterest board for the entire Playful Brides series with the pictures of who I think of as the main characters. In my mind, Delilah looks like Ellen Page and Thomas is Justin Bartha.

Q: What is one thing the heroine, Delilah, can’t live without?

A: Sigh. Thomas. Though she doesn’t know it at first.

Q: NO OTHER DUKE BUT YOU is the last novel in your wonderful Playful Brides series. How do you feel about the series coming to an end?

A: I’ve loved these characters for years and it’s bittersweet to see the series end, but I’m also looking forward to writing something new!

Q: Would you say it was more or less difficult writing NO OTHER DUKE BUT YOU knowing it’s the last in the series?

A: Yes! I was worried that the readers wouldn’t like it or think it’s a fitting end to the series. But in the end, I wrote the book I wanted to write to wrap up the series and I can’t wait to share it with everyone!

Q: If you could work with any other famous author, who would it be and why?

A: Lisa Kleypas! She’s just my all-time favorite. Love, love, love all of her books.

Q: What was your favorite scene you wrote, and why?

A: I don’t want to give anything away. But there is a scene involving some magic perfume and sneaking around at a country house late at night and it was just pure fun to write the fall out after that.

Q: What was the hardest scene to write in NO OTHER DUKE BUT YOU, and why?

Q: When working on a manuscript, is it easy for you to keep separate ideas for other projects, or what strategies do you use to stay focused?

A: I usually just jot down a new idea and file it in a folder on my computer. I don’t let much distract me from what I’m working on at the moment. But I always seem to get a new idea when I’m fading off to sleep or driving. It’s never convenient. Ha!

Q: How did you come up with the idea of a love potion to get Delilah and Thomas’s romance rolling?

A: It’s inspired by the love potion in A Midsummer Night’s Dream, which is just a purely fun play that I adore!

Q: Are you currently working on any other projects you would like to share with your readers?

A: Yes! I’m working on a contemporary romantic comedy called HIRING MR. DARCY. It’s about a history professor who has two weeks to turn her brother’s hot best friend into a suitable Darcy for a competition in Bath, England so she can beat her ex and his new starlet girlfriend. It’ll be out this year! I’m also noodling over a new Regency series that’s going to be outrageous fun!

A: If you read NO OTHER DUKE BUT YOU, I’d love to hear what you think! You can find me at www.ValerieBowmanBooks.com where there are links to email me, tweet me, or find me on Facebook or Instagram.

From No Other Duke But You. Copyright © 2019 by Valerie Bowman and reprinted with permission from St. Martin’s Paperbacks.