Romancing the Rogue by Erica Ridley (2017) 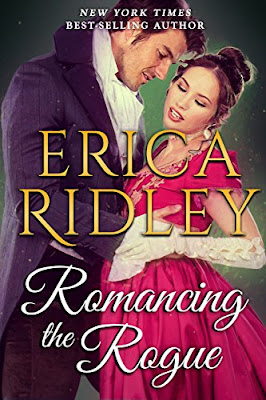 When the new earl inherits, poor relation Miss Rebecca Bond must wed immediately or be out on her ear. The only man she’s ever loved is summoned to hear the will—but he already rejected her so soundly that they haven’t spoken in years. Yet who better than a rakish Viscount to teach her how to snare a gentleman who appreciates her charms?Daniel Goodenham, Lord North Barrows, regrets nothing more than the lost friendship with the one woman who treated him like a man, not a title. Fate has given him the perfect pretext to win her forgiveness—even if it means having to matchmake her to someone else. But now that she's back in his life, he’ll do anything to convince her to choose him instead...

Another delightful regency romance penned by Erica Ridley.
This short, sweet, light hearted tale is just the thing to brighten up a dull day.
Daniel and Rebecca make a darling pair.

I loved the story but a couple of things struck me as I was reading it.
I would have liked to see Daniel actively engaging in his reluctant matchmaker role rather than just talking about it. Surely her dowry would have enticed someone....anyone to marry her? She didn't have any suitors for Daniel to play matchmaker with or chase away as he probably would have done.
At the end of the day Daniel didn't have any competition and I think he deserved to have to put in some effort to win Rebecca.
Rebecca is far too forgiving and I'd have preferred to see Daniel grovel a bit more for forgiveness.
In saying that it is a charming and enjoyable story.