Enter to win the newly released audio book of A Scone to Die For.
a Rafflecopter giveaway 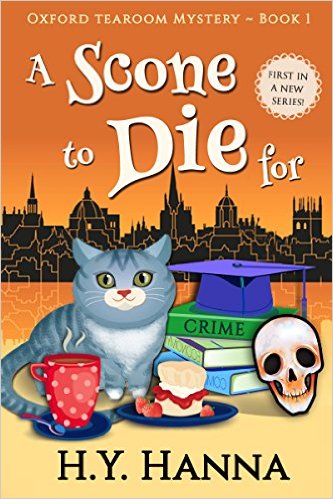 FIRST IN A NEW SERIES!When an American tourist is murdered with a scone in Gemma Rose's quaint Oxfordshire tearoom, she suddenly finds herself apron-deep in a mystery involving long-buried secrets from Oxford's past.Armed with her insider knowledge of the University and with the help of four nosy old ladies from the village (not to mention a cheeky little tabby cat named Muesli), Gemma sets out to solve the mystery--all while dealing with her matchmaking mother and the return of her old college love, Devlin O'Connor, now a dashing CID detective.But with the body count rising and her business going bust, can Gemma find the killer before things turn to custard?(*Traditional English scone recipe included)

A brilliantly penned mystery with lots of humour.

There are many things that I loved about this book. The author's sense of humour really shines through in this book. I don't usually find the circumstances surrounding a murder to be humorous but I couldn't help it with this one. The murder victim was discovered in the courtyard of Gemma's tearoom with one of her scones shoved in his mouth. I didn't feel too badly about him as he was such a nasty character to begin with.

I loved that Gemma wasn't the only amateur sleuth trying to solve the murder. The 'Old Biddies' proved helpful on occasion and more often a source of hilarity. Gemma's mother is also a great, eccentric character. Between her matchmaking schemes and forever forgetting her Ipad password she injects another layer of humour into the story.

I enjoyed the romantic subplot of the story. I'm not sure Devlin deserves to have a second chance with Gemma this early in the series so I was glad that she has other options to play with. I hope Devlin suffers a little bit before/if they end up together.
The murder mystery itself was well thought out and had an element of suspense which I really enjoy. I also had no clue who the killer was until it was revealed in dramatic style.
The really important and huge mystery of where Muesli the cat disappeared to also came to a timely conclusion and I was (spoiler alert!) relieved that he was okay.

A really great, entertaining read and I can't wait to get my hands on the rest of the series.

I received a copy in exchange for an honest review.
Posted by Just Book Talk at 13:07:00