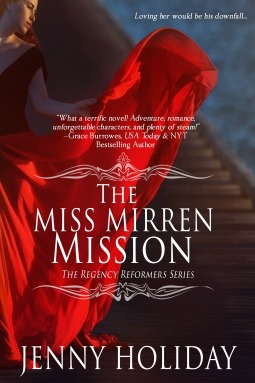 Blurb:
To society, the Earl of Blackstone cuts a mysterious figure. He is eligible, withdrawn, and endlessly fascinating. Yet as an integral part of London’s underground spy ring intent on defeating Napoleon, Blackstone has no mistress but the cause.
Miss Emily Mirren is considered “unbiddable” by the ton. She wields a fierce intellect, which she channels into her own secret cause—writing an abolitionist newspaper column under a male pseudonym.When Emily’s aims clash with Blackstone’s, they stray into a dangerous game of attraction and subterfuge, and secrets are the going currency. And in order to complete the most important mission of his career, Blackstone must thwart Emily, even if it breaks both their hearts.

Review:
One of my favourite genres, historical, romantic mystery. This is Jenny Holiday's first foray into the genre and I would definitely read more of the same by the author. There was plenty of intrigue to keep the story flowing. The background to the characters was very interesting and it added a sense of credibility to their blossoming friendship.
The characters meet during a house party but neither are there for romance. They have their own agendas to pursue. The Earl of Blackstone is a spy and determined to catch his nemesis Le Cafard or 'The Cockroach.'
Emily is digging up evidence of slave trading against her former guardian Mr. Manning and to reunite with her long lost childhood friend, Billy. When their agendas clash Blackstone must betray Emily in order to catch his prey.
It wasn't too difficult to guess the identity of Le Cafard but it didn't matter. I enjoyed reading the story unfold and how Blackstone and Emily resolved things in the end.
I'd recommend this book for fans of the genre.