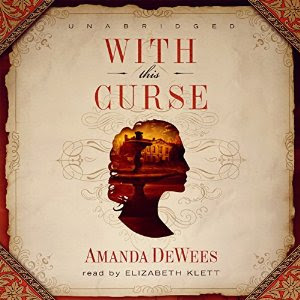 Winner of the 2015 Daphne du Maurier Award for Excellence in historical romantic mystery and suspense!

Publisher's Summary
Can a curse strike twice in a woman's life? In 1854, 17-year-old chambermaid Clara Crofton was dismissed from Gravesend Hall for having fallen in love with Richard Blackwood, the younger son of the house. Alone in the world, Clara found a tenuous position as a seamstress, but she always blamed the Gravesend curse for the disaster that had befallen her - and for Richard's death soon after in the Crimean War.
Now, more than 18 years later, Richard's twin, Atticus, seeks out Clara with a strange proposal: If she will marry him and live with him as his wife in name only to ease the mind of his dying father, Atticus will then endow her with a comfortable income for the rest of her life. Clara knows that he is not disclosing his true motives, but when she runs out of options for an independent life, she has no choice but to become Atticus' wife.
For Clara, returning to Gravesend as a bride brings some triumph...but also great unease. Not only must she pretend to be a well-born lady and devoted wife to a man whose face is a constant reminder of the love she lost, but ominous portents whisper that her masquerade brings grave danger. "This house will take from you what you most treasure," her mother once warned her. But the curse has already taken the man Clara loved. Will it now demand her life?
Learn how Clara's thrilling story unfolds in With This Curse, an addictive Victorian romantic suspense novel by Amanda DeWees. Listeners who enjoyed DeWees' acclaimed gothic novel Sea of Secrets as well as those who love Victorian mystery and traditional gothic romance alike will be captivated by this strong yet vulnerable heroine and her suspenseful journey through the perils of heartbreak, danger, and love.

Review 5 stars
It has been a long time since I've read a good Victorian gothic mystery. Amanda deWees far exceeded my expectations in 'With this Curse.' If I could make the 5 stars extra shiny in gold I would. I loved this book so much.
It has everything you would expect from the genre; a dark old mansion with strange inhabitants, an overall atmosphere of menace, a mystery, danger, love and betrayal. I was enthralled with the story from start to finish. I enjoyed the slow romance between Atticus and Clara. They are both great characters with a well developed history. Both are easy to relate to and I couldn't wait to see them get together. I really liked that their romance is taken in a sedate pace with more emphasis placed on their inner feelings rather than the two getting their kit off at the first opportunity.                                                             It is for these reasons that this book will suit most people, especially anyone who prefers romance/mystery to be plot driven and without the smut.
The threat of the curse looming over the household created a dark atmosphere in the story and it contributed to the gothic feel of the novel without making it oppressive and heavy.
The narrator, Elizabeth Klett, did a brilliant job of reading the story and performing the voices of the various characters. She has a lovely tone of voice, easy to listen to and you soon find yourself lost in the story, not concentrating on or being distracted by her narration.
I didn't want this story to end and I was quite sad when it was over! I wasn't ready to say goodbye to Clara and Atticus and they stayed with me long after I had finished it.
Luckily there's a sequel, 'Cursed Once More,' which I immediately delved into.