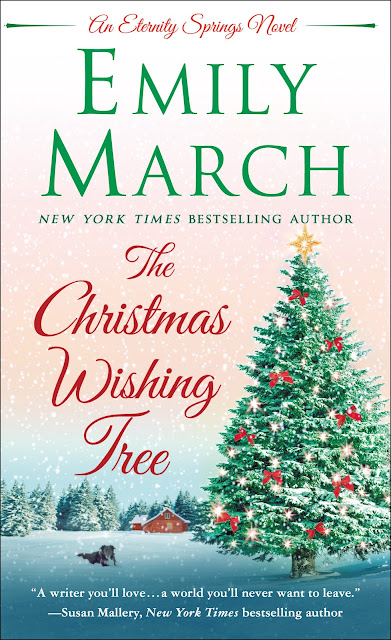 Sometimes life's most magical journeys bring you back to where it all began...From New York Times bestselling author Emily March comes The Christmas Wishing Tree, an enchanting account of the magic and miracle of Christmas.
A man who loves adventure and the open sea, Devin Murphy returns for a short Christmas trip to his small hometown of Eternity Springs. Immersed in the joy and magic of the holiday season all around him, he doesn't hesitate to play along when a young boy phones Santa to ask for a very special wish. Devin never guesses that a wrong number has the potential to make everything in his life so right.
Jenna Stockton adopted Reilly when he needed a mother and she intends to keep him safe. A small town across the country called Eternity Springs seems like a good place to hide from their past without any complications --until sexy Santa himself discovers her secrets. When Devin proposes a daring plan to face down the danger together and defeat it once and for all, she is tempted. Maybe Devin really is capable of making wishes come true? Perhaps in a Christmas wish they'll both find the miracle they've been looking for all along...
A delightful Christmas novel in the New York Times bestselling Eternity Springs series.

This is a really sweet Christmas romance. It can be read as a stand alone even though it is the fifteenth book in the series.
I loved the relationship that developed between Devin and Reilly over the phone as Devin pretends to be Santa Claus in answer to Reilly's phone calls.
The stalker story line was quite exciting in places and I got a sense of the threat that Reilly and Jenna were facing. I was disappointed however in how that storyline was resolved as it fizzled away into nothing and was quite anticlimactic.
The romance between Devin and Jenna was cute. I liked how he tried pushing her in the path of another man in order to stop himself from falling in love and then getting all jealous when she starts spending time with someone else. It led to a few humorous incidents.
All in all, this was a nice holiday romance and I would quite happily read more of the series starting from the beginning.

NASHVILLE, TENNESSEE
Christmas carols played softly in the background. The scent of spiced cider perfumed the air. Shoppers munched happily on gingerbread cookies and perused the bookshelves for that perfect gift.
Dr. Jenna Stockton imagined ripping the halo off the angel’s head and choking her with it. Instead, she reached deep within herself for patience and managed to find a smile for the costumed character behind the bookstore counter. “If I could speak with your manager, please?”
“She’s awfully busy.”
Jenna thought of the ridiculous length of her own to-do list as she fought to keep her smile from turning into a sneer. “Yes, well, it’s that time of year, isn’t it? Your manager?”
The little angel gave a haughty sniff, and then said, “If you’ll step out of line, please?”
Without missing a beat, the angel turned a bright smile toward the woman waiting behind Jenna. “I’m sosorry for this unfortunate delay, ma’am. I’ll be as quick as I possibly can.”
Jenna didn’t snarl like a rabid dog. She didn’t. She smiled at the woman behind her in line. Sweetly. Without canines.
The woman and the four people behind her each gave Jenna an annoyed glower. She gave them all a smile too, then reached for the nearest book, which she pretended to read until the clerk returned, accompanied by a fiftysomething woman dressed like an elf. The angel gestured toward Jenna and said, “This is the one, Ms. Thomas.”
The elf spoke in a harried tone. “May I help you?”
“I hope so.” Especially considering that I went out of my way to support a local business rather than ordering online. Jenna set down the paperback. “I placed a special order two weeks ago and someone from this store called me last week to tell me it was in. However, your … angel … can’t find it in your computer system, so she insists I’m mistaken.”
“Do you have your receipt?”
“Not with me, no.”
“Well, if you’ll come back—”
“I don’t have time to come back. I ordered the books for an event that begins”—Jenna checked her watch—“in forty-five minutes. I’d like you to check your stock room. My name is Jenna Stockton.”
“Ms. Stockton, I can’t—”
“I ordered thirty copies of New Adventures in the Christmas Angel Waiting Room.”
“Oh.” The manager pursed her lips. “Oh. I recall that order.”
“Good.”
Then the manager winced. Uh-oh. Maybe not so good. Jenna drew a deep, calming breath, then asked, “If you will get it for me, please?”
“Oh dear.”
Jenna closed her eyes.
“I’m afraid we had some internal miscommunication. We sold out of our stock of that particular title and an employee unfortunately failed to notice the hold notice on your order. She put them on the shelf.”
“How many are left?”
“It’s a popular title,” the manager hedged.
Jenna leaned forward. “The books are for pediatric cancer patients at Children’s Hospital. The Christmas party is at four o’clock.”
“Oh dear,” the manager repeated. “Four o’clock you say?”
Jenna nodded curtly.
“I’ll call our distributor. If you can stop back by—”
“You’ll need to deliver them directly to the hospital. To the attention of Dr. Jenna Stockton.” She removed a card from her purse and handed it to the manager. “Here’s the address. Take them to the information desk in the lobby. I’ll tell the volunteers working there to expect them.”
“But we don’t have a delivery—”
Jenna folded her arms and gave the manager her best take-no-prisoners look.
“I’ll do my best to have them there by four, Dr. Stockton. I apologize for the inconvenience. Now, is there anything else I can help you with? I saw you looking at the new Liza Holcomb thriller.” She picked up the book and handed it to Jenna. “It’s a fabulous book. Scariest stalker story I’ve read in years.”
Jenna quickly returned the book to the display table. A stalker story? That was all she needed. “No, thank you. All I need today is what I ordered. Thank you for the help. You have my phone number. I trust if there is any further problem, you will give me an immediate call?”
“Yes. Of course.”
“Perfect. Merry Christmas, Ms. Thomas.”
“Merry Christmas to you too, Dr. Stockton.” The manager gave her a bright smile that didn’t quite hide the worry in her eyes.
Jenna headed for the door, glancing over her shoulder before pushing it open. The elf was on the phone, the angel had been replaced at the register by a reindeer, and Frosty the Snowman was on hands and knees beside the urn of mulled cider wiping up a spill. She sighed. Angels with attitude aside, she liked this little store. She really hoped they didn’t let her and the children down.

Copyright © 2018 by Emily March in The Christmas Wishing Tree and reprinted with permission from St. Martin’s Paperbacks.
Posted by Just Book Talk at 12:02:00